On the Road with HTHL: Our Visit with Four Homeschool Boys

SO! EXCITED! We finally got the chance to go to Bassett, Nebraska! Why so excited? Bassett, Nebraska is the home of two of my favorite fictional characters that I created for HTHL’s filmed literature guides, Harley and Harley’s Wife. This lovable husband and wife team help HTHL students apply the theme or lesson learned from the literature book. The “Harley” segment is like a radio drama on film, complete with story line and wild foley. Harley’s wife is a spunky lady that often misses the big picture in life. Besides being a farmer’s wife, she’s the air traffic controller of Rock County Airport that helps HTHL’s fictional bush plane get in the air. Harley doesn’t say much, but boy oh boy, does he quietly get things done in the midst of his wife’s obliviousness. What makes them so adorable? They are in love with the Lord and in love with each other.

In the early stages of the development of the first HTHL Literature Adventure, Island of the Blue Dolphins, I knew I needed a small town in the middle of the United States where the HTHL bush plane could take-off. After dinner one night, I spread out the USA map and our family began looking for small towns in middle America.

The word “Bassett” caught our eye. After all, Knucklehead, the mascot of HTHL and the “bush plane pilot” who shows up in all of our films is a basset hound! It was meant to be! Bassett, Nebraska became the setting for the “Harley” segment.

I immersed myself in researching this sleepy little town via the town’s website and Google Earth. While writing, I often would close my eyes and picture what life was like for this fictional ma and pa farming couple of my imagination.

Gathering information for future episodes was on the top of my priority list. I was thrilled to walk down main street where I took in the sights, sounds, and the smells of the neighborhood. Forrest helped me by snapping tons of pics. I recorded types of businesses, read billboards outlining the city’s yearly events, and noted unusual items for sale in the windows. BusyGirl filmed the Rock County runway and the general landscape, so I would have ample pictures to create believable storylines. We even ate pizza at the local eatery and engaged two waitresses in conversation about the town they both call home. Ideas for future story lines flooded my mind and filled up pages in my writer’s notebook. It was a writer’s dream come true to have this kind of opportunity.

No lie, I could have spent a whole week here. Bassett, Nebraska was everything I imagined and so much more. We said our goodbyes to a town that has brought me so much joy as a writer. I can’t wait for you to meet Harley and Harley’s wife in the HTHL’s Literature Adventure. You’re going to fall in love with this fictional couple as I did!

We made a quick left at the end of Main Street. Miles of rolling hills gently rocked the HTHL van. The sunset was magnificent on the open plains. The local radio station filled the car with good hometown community announcements (Announcer: There’s a men’s Bible study on marriage in the back of the pizza place every Monday night at 8:00pm.) mixed with 80’s rock. Forrest once again pounded out the miles and found a clean and secure truck stop in Rapid City, South Dakota. We snuggled in our toasty sleeping bags for the night.

The sun beamed through the car window shades. We uncoiled from our rolled up sleeping position and stretched our bodies. We were pretty excited; we had a date with four famous homeschool boys. The windy roads of Black Hills Forest National Park led us to a notable American monument. The HTHL Team couldn’t wait to see Mount Rushmore.

No epic music was needed to drive the sense of awe and wonder as we took steps closer to the observation deck. Pictures do not do it justice. Wrap your brain around some of these facts.

Did you know that these four presidents were all homeschooled? Yup! You read correctly! Homeschooled!

The monument is a tribute to the vision of an idea called America, the quest for freedom for all, and a desire to see the expansion of that freedom. These humble men were not perfect, no one is, but these four homeschooled boys exemplify the ideals we all strive for as a nation. We stood at the base of the mountain looking up at the massive carved images. Team HTHL’s shoulders widened with inspiration and responsibility.

“Let us place there, carved high, as close to heaven as we can, the words of our leaders, their faces, to show posterity what manner of men they were. Then breathe a prayer that these records will endure until the wind and the rain alone shall wear them away.”

We left Mount Rushmore, grabbed some food at a local market and had a bite to eat next to a small pond. We met a goose, and we named him Harold. The ol’ HTHL van needed an oil change and transmission service. So we took a short break at a Super Lube in Rapid City, South Dakota. With fresh oil in the engine, we made our way back across the lower half of South Dakota and parked at a truck stop at Albert Lea, Minnesota.

The highlight of the truck stop was watching a busload of elderly women from Minnesota trying to figure out how to work the air blade hand dryer in the bathroom. Bless their hearts; apparently they had never seen one before. I was impressed by the favored technique that included, hands in the blade dryer, knees bent, and a rhythmic motion like they were churning butter. Aaaaadorable.

In the morning, we turned right and headed south through Iowa and made a slight left toward Illinois. We saw some the prettiest farms. There’s thousands of acres, all neat and tidy. The freshly tilled dark, robust soil was ready to receive corn and soybeans seeds. Once again we found a reasonably priced hotel and enjoyed hot showers and a bed. Life is good!

In the afternoon, we arrived at the APACHE convention and set up our booth. Set up was slightly challenging. Rather than a 10′ X 10′ booth to work with we were given an 8′ X 8′ booth. We had to forgo our 10′ signage. However, it still worked out well.

Mike and Sheri Krohe, President and board members of APACHE welcomed us to the convention. They have five kids (four boys and one girl), and we just seem to hit it off! The Krohe dad and boys L-O-V-E fishing, and so does Forrest. They immediately started swapping fishing stories which lead to hunting stories that lead to all things manly. BusyGirl and their daughter chatted about cooking, and Sheri and I began a conversation that lasted all weekend and circled around homeschooling, writing, and our families. After set up, we went to a local restaurant with the Krohe family and stayed until closing time.

Smaller conventions have a real homey feel. Homeschool moms and dads weaved through the vendor hall with ease and had ample time to see everything. Kids loved stopping by our booth to try out their penmanship with HTHL’s giant pencil.

Most of the time, Forrest and I don’t have time to hear the keynote speaker. However, because this wonderful leadership team provided us with dinner, we were able to stay late and listen to Hal and Melanie Young. It was a delight to hear them speak after having read their books.

I met up with a local favorite, The Robot Casserole Team. They build, they compete, and they have a lot of fun doing both. You can check out their work on YouTube. The contraption in the picture (below) can “play” ball. Very impressive!

Another highlight of the Peoria Convention was the Handsome Coffee Co owned by Aidan Randleman, a homeschool graduate who is trying to earn money for college by importing and roasting his own coffee beans. He served up one fine dark roast that I thoroughly enjoyed with a chocolate chip gluten free muffin baked by the Krohe daughter.  Simply delish! I love the can-do entrepreneur spirit of homeschoolers!

You can catch my interview with these two fine gentlemen on HTHL’s YouTube Channel.

One of my favorite parts about hosting workshops is the question and answer time at the end. It’s where I apply the principles I just taught to individual situations. As homeschool parents, we grow as we share information. Believe me; I’m taking my own notes for my own learning and future blog posts. Even if you can’t get to a conference, you can always ask me a question. Let’s learn together!

The convention ended, and this time, tear down was a snap! The Krohe boys helped us out, and we were packed up in about 45 minutes, half of our usual time. It gave us an opportunity to help out some of the other vendors. We went to dinner with vendor friends, Susan Marlow and her husband, and owners of Heppner’s Legacy, Brad & Nancy Bjorkman. After long hours of standing in our booth, a comfy chair, some comfort food, and a lot of hardy laughs with vendor friends refreshed our weary souls.

You might remember, we met Brad and Nancy back at the North Dakota Homeschool Conference. It was a pleasure to get to know them better over breadsticks, soup, and salad. Brad and Nancy live in Elk River, Minnesota, and they graciously invited us to spend time with them in their home. We put the date on the HTHL calendar to visit!

We attended Church 2:14 with the Krohe family. This beautiful church began about three years ago with a vision to reach those who don’t know Christ. They meet in a rock concert event hall. Since there aren’t any rock bands that perform on Sunday mornings, the management invited Church 2:14 to use the facilities. It’s the perfect place to gather in Jesus’ name!  It was Kid’s Sunday, so the most adorable kids prayed, or shared a small testimony. We were so blessed to hear from their children’s leader who encouraged all of us to take steps up in discipling our children.

After church, we went out to lunch at a local build-your-own-burrito restaurant. Since the boys were talking fishing all weekend long, all the guys were all itching to put a pole into the water.  We went to a little pond that was on the back end of their friend’s farm and enjoyed the afternoon.

The warm sun, sound of the croaking frogs, and gentle breezes all added to this beautiful day of rest. It felt great to kick off my shoes and bury them in the warm pebbles that lined the bank of the pond. Sheri and I continued our heart-to-heart conversation and encouraged each other to take the next steps of faith.

BusyGirl finally got to string up her new bow that she bought in Missouri and get in a little target practice. The boys and menfolk caught small bluegills, and enjoyed each other’s company.

What a delightful way to end the week! We really didn’t want to say good bye.

Thanks for sharing the road with us! Join us on the convention trail as we make our way back up north to Duluth, Minnesota for the MACHE homeschool convention!

From Our Home (On the Road) to Yours,

Don’t forget to keep up with the latest On the Road with HTHL YouTube Vlog: Click HERE! 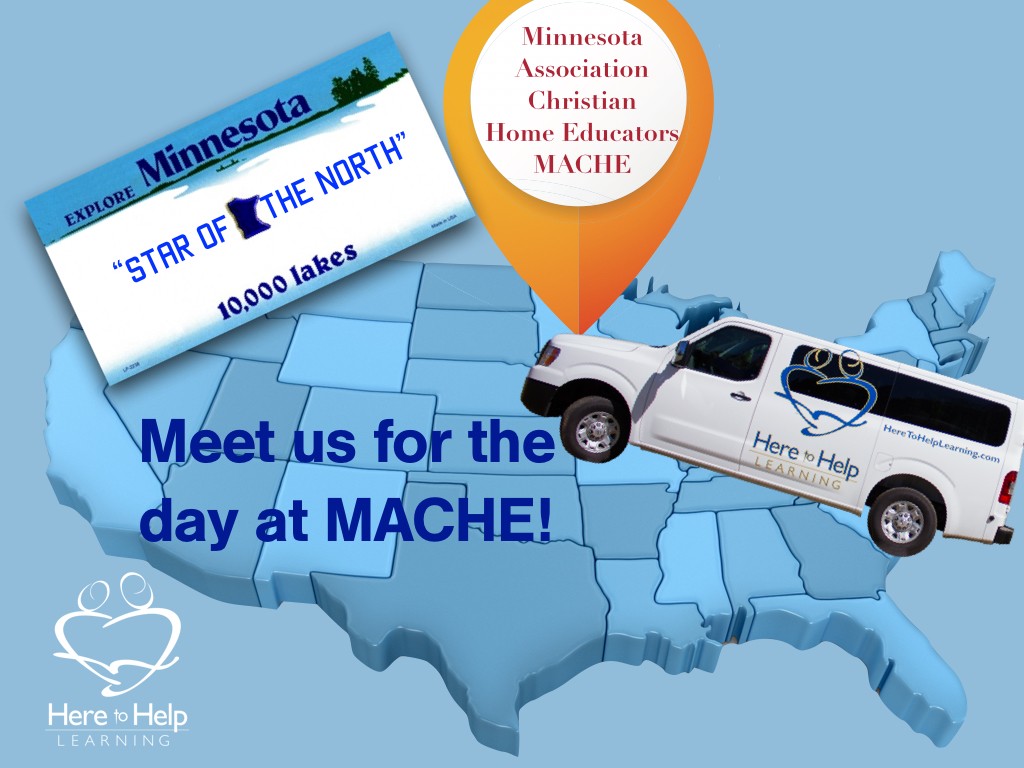