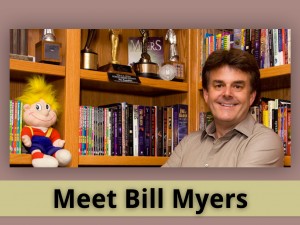 Bill Myers is one of our featured authors in the Here to Help Learning Write-A -Book Project (Flight 3: Launching Essay Series) He is an award-winning novelist including the C.S.Lewis Award with over 8 million books and videos sold. He has penned over 119 books for children, teens, and adults. Many remember him best for the beloved McGee and Me series. But whether the genre is a comedy, thriller, fiction, or non-fiction, he has one stated purpose… draw readers closer to the heart of God.

Well, I didn’t actually meet him. I came into my son’s room and took note of a large wall poster of a young boy in a death grip with a dinosaur. The poster seemed “normal” for my eight-year-old boy, and then I cocked my head with an audible, “Huh?”  I read the title, “.. My Life as Dinosaur Dental Floss???? “I don’t get it, ” I said to my son. “…Dinosaur Dental Floss?” I questioned again. “Oh mom, it’s these really cool books called, The Incredible World of Wally McDoogle. I met the author at school (pre-homeschool days) today. His name is Bill Myers. He’s really cool too! It’s a whole series. They are so funny and really cool! And you know what’s really cool? They’re Christian books! It’s a series! Can we get them? ” His excitement was undeniable. And “really cool” became the adjective phrase of the day as my son bubbled with further explanation. Needless to say, Bill Myers  and the Wally McDoogle series became a part of our family’s life. We waited with anticipation for the next book in the series to reach the bookstore’s shelf. If you have read any one of Bill’s children’s books, you will see why they are read with fervor by children and teens all over the world. Currently, Bill has seven different book series for kids packed with crazy twists and turns, that delight and inspire young minds.

Fast forward almost 20 years. I am sitting at my desk in creative mode, immersed in the throws of developing the film script for the Here to Help Learning Write-A-Book Project.  I sigh and reflect. Many times I would tell my co-op students about “The real world of Christian writers” and how authors use the gift of writing to draw others into a deeper walk with God.  I longed for my students to meet and learn directly from professional writers.

“Wait a moment!” I thought, – “…with film, we can make that happen!” And so the Meet the Authors , a mini-series for the Write-A-Book project was born. Without question, Bill Myers was at the top of my list to contact.  I emailed Bill, and to my delight, he agreed to the filmed interview. We spent a lovely time at his home as he imparted writing wisdom and tips to Here to Help Learning’s young budding authors. However, it was his dedication to following Jesus that inspired me the most.

During the interview, through Bill’s words of encouragement to the children, I was personally challenged to mirror the steps of my Lord, not in “Simon-Says” fashion but with devotion.  Bill has a personal commitment to saying, “Yes” to God in all things. It is not just a nice catch phrase, but a way of living for Bill. He gave the students many examples of when he said,  “Yes to God” and the experiences that followed. One of the significant adventures that followed was when Bill said, “Yes” to the career of a writer. He was quick to say in the interview that writing was not a natural gifting in his early educational years. In fact, it was his worst subject, even in college. However in his young adult years, Bill learned the power of story to open hearts to the truths of the gospel. He recognized that a well-crafted story was the perfect medium to deliver rock-solid, yet sometimes hard-to-hear truth. In the interview, he asked me a poignant question, “Which did Christ use more often to communicate truth, facts and figures, or story?” I thought for a moment and recounted all the parables Jesus had told. I answered, “Story.” He leaned back in his chair, content with God’s calling on his life, smiled , and said, “I am a big fan of fiction.” Despite his opposition to God’s ideas for his profession, Bill said, “Yes” and began to write many stories.

In one of the most epic challenges before him, Bill Myers and his team have said, “Yes” to bring his book entitled, Forbidden Doors, a C.S. Lewis award-winning novel to the big screens. This movie answers relevant questions about the influence of dark spiritual influences that have crept into our everyday world. It is an eye-opening movie; just watch the promo. In a world where there are shelves of books for teens and adults offering a counterfeit life in the supernatural/paranormal, this film offers a fresh perspective to a hungry generation.

George Lucas commented, “The influence of the church which used to be all-powerful has been usurped by film. Films and television tell us the way we conduct our lives, what is right and wrong.”

Bill Myers and his team plan to replace that influence by bringing about a 180 degree change in the film industry! His plan, which is no small task, is to usurp Hollywood’s effect on culture.

I Hope to Meet with Bill Myers Again (October 2015)

I hope that I will, once again, meet with Bill Myers through his writing and filming talents. I can’t wait to see Forbidden Doors in my local movie theater.  I will admit; I am not much of a thriller-type movie patron. When I watch it on the big screen, I will wince at the scary scenes and probably dig my nails into my husband’s arm. However, and I will use Mr. Myers’ words, “I am a big fan of fiction and the power of a story to change lives.” This month Bill is raising funds to make this happen. Check out Forbidden Doors  and all the excitement swirling around this movie. Let’s help Bill and his team make this happen. Thank you, Bill Myers for inspiring all of us to keep saying, “Yes” to following Jesus and for valuing the power of story to change lives.

From our Home to Yours,

Have you or your kids read any of Bill Myers’ book? What did you think of the Forbidden Door promo? Are you a Bill Myers fan?